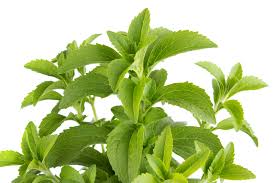 We use the Stevia plant extract as the primary sweetener for our drinks.

Stevia extract is a natural plant extracted sweetener and is both carb and calorie free, and is suitable for use by diabetics.

Stevia is a species of plant that originates from Paraguay. It is also known as sweetleaf and sugar leaf. The Guaraní Indians from Paraguay and Brazil have used it as a sweetener and a medicinal herb for hundreds of years.

European people learned about the existence of the plant already in the 16th century, but it took more than three hundred years until a botanist from Switzerland who emigrated to Paraguay tried to analyse it with scientific methods.

The sweetening components of the stevia plant are located in its leaves. The most important components are “stevioside” (up to 18 percent of the leaves) and “rebaudioside A” (up to 4 percent). After they are extracted and purified, they can reach a sweetness that exceeds the sweetness of sugar by as much as 400 times.

After it had been discovered that stevia is of an outstanding sweetness, but is also free of calories, the consumption of the plant and its extracts increased in many countries worldwide. This process occurred in the last third of the 20th century.

Japan was the cutting-edge country in the international use of stevia. There, the plant has been used for around four decades. The Japanese people use stevia as a component of many cosmetic products, and it is to be found as an ingredient of countless groceries.

The European Commission decided in November 2011 to allow the use of the stevia plant extracts or steviol glycosides in the food sector starting December 2011.

How does the extraction of steviolglycosides work?

The extraction process of steviolglycosides from the leaves of the stevia plant is comprised of two main phases. Phase one includes water extraction of the leaves of the Stevia Rebaudiana Bertoni plant, and a preliminary purification of the extract by employing an ion exchange chromatography. In the second phase, the recrystallisation of the steviolglycosides occurs. To make a long story short: the stevia leaves become dissolved and filtered, then the glycosides become crystallised.

To find out more about fermented foods, new products and offers, sign up here: